Last week I talked a about using notepads and sketchbooks as a source of inspiration. This week I’ll be looking at a simple technique that has worked consistently well for me over the years for generating ideas from absolutely nothing: using random image or word stimulus.

Every creative will encounter blocks, times when you stare endlessly at a blank page unable to think of where to start. This is especially so if you are trying to think of something new. If you have been given a commission or have a specific task this will always be easier than thinking of “anything you want”. This is because creative inspiration requires context, it requires some form of restriction in the form of guidelines or some kind of prompt. When faced with being able to do anything, we will most likely do nothing, because we have nothing to focus on. A stimulus can change all of that by bringing all of our creative focus to bear upon it. This is useful in three ways:

Deciding Where to Focus

A creative stimulus can be any image, set of images, word or set of words you decide to focus on. These can be chosen at random or from a particular source. So say I want to write a short story but I’m struggling to define my main character, I could do a google image search for faces, scroll down with my eyes closed, pick the first face I look at and make myself go from there. I could define the theme of a painting by doing a google search for a list of descriptive words, scrolling through and picking one at random. I could flick through words and pictures in books or magazines, to find the characteristics for the setting of a story. I could stare out of a window and base a poem on the first person or creature to go by, or take a train ride and write a story based on the first person to sit in front of me, or the first conversation I overhear.  I could look into the cream swirling in my coffee and paint the first recognisable creature I think I see there.

You can begin with virtually anything and it is what you begin with that gives definition to where you go with it, giving plenty of opportunity for inspiration to strike.

Making Something out of Nothing

When words don’t come easy, I make do with silence and find something in nothing. – Strider Marcus Jones

Once you have a stimulus – a word or a face or a set of both or either – you must stick to them and use them as the basis for what you are creating. It can evolve into something completely different to how it started, but rejecting a stimulus because you don’t like it or it challenges you will mean missing out on an opportunity to test what you are capable of and probably lead you to stumble straight back into a creative block. Push yourself and you may be pleasantly surprised.

If you are using a single stimulus the idea is to really think about that one thing, asking yourself as many questions as you can in order to investigate and use it. What does that word mean to you, why would someone talk about it, where did you last see it, when did you last do or see something related to it? What does that person do with their time, why are they wearing those clothes, where do they come from and where are they going, when did they last smile and why? If you are using multiple stimulus it is the relationship between each word or image that should spark you off. How does “beauty” relate to “faulty” or to “rabbit”? How does an inkblot relate to a beautiful woman’s face or a sports car to graffiti of a bird?

By investigating the stimulus we bring it to life in a new way and make it part of our creative process. This can be the basis of quick sketches or long stories, the only limits are of your choosing. 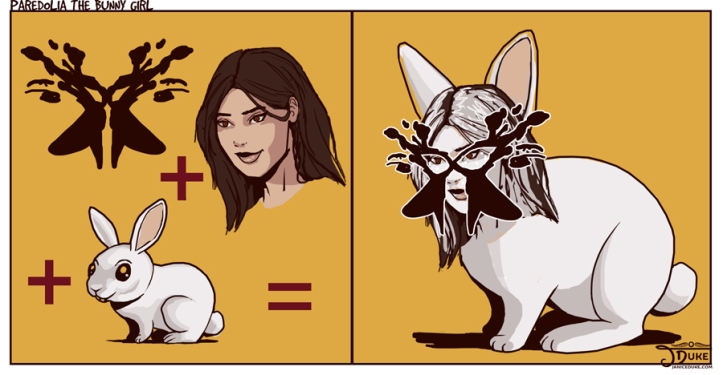 Practicing the Art of Connection

Vision is the art of seeing what is invisible to others. – Jonathan Swift

Pareidolia is a psychological phenomenon involving a stimulus in which the mind perceives a pattern where none actually exists. When this occurs compulsively it is a symptom of mental illness, but when it is used as a creative tool to establish relationships between seemingly unrelated phenomenon it can be wonderfully and bizarrely creative. What does that patterned coffee cup have to do with the strange shadows on the wall? What is that woman in the red coat thinking about that makes her frown like that?

As with so much in life, the more you look at things in this way the better you get at it and a world that may seem dull to some becomes populated with fantastical imaginative delights for others. Practice!

I am fascinated by that kind of beauty that arises when a sewing machine meets a bicycle on an operating table. – Alfred Jarry

Creative inspiration may come out of nowhere from time to time, but more often than not it requires something to focus on, especially when you’re blocked. By giving yourself something to focus your attention on you offer it up for your imagination to play with, creating an opportunity for strange, new, or even obvious ideas in hindsight. Something where there was nothing.