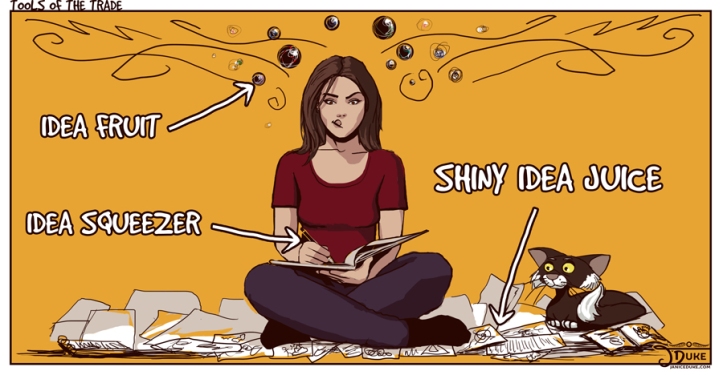 As a creative that often works to deadlines I am in the business of using imagination and inspiration as tools, rather than viewing them as the rare and fleeting gifts of fickle muses. I see it as entirely possible to produce inspiration and train the imagination, because I do this on a regular basis, as do all creatives. In this series of articles I intend to demystify the idea of the “creative genius” a bit by offering some concrete things you can actually do to find inspiration.

The number one tip should probably be that you want to be inspired, that you crave that fabulous idea so much that a bit of poking and prodding will convince it to scurry out of hiding and harass you like a hungry cat to make it happen. This should really be obvious, but if you try my suggestions and come up empty I’m going to strongly advise from the get go that what you’re lacking is drive rather than inspiration. You can be the most inspired person in the world, but if you lack the motivation to do anything with it nothing will happen. This is probably the number one reason that less talented but more motivated creatives can achieve success where talent alone may fail.

Instead of dwelling on that I’m going to assume that you are motivated and the number one tip we are going to start with is a very traditional but still underutilised method: put ideas down on paper, as and when you have them. Whatever kind of creative you are, effectively taking notes and jotting down sketches is a key way to keep yourself inspired. Notebooks and sketchpads are vital in the following ways:

An Idea in the Hand

Lots of people have or can have great ideas more often than they realise, the most fundamental difference between those people and those that go on to actually make something with them is actually noting them down. From here you have a tangible source of ideas to potentially refine or develop. It is a simple but crucial habit. An idea in the hand is worth a thousand you forgot. Carry a notepad and pen, always have them nearby. Simply doing this may get you thinking and even doodling cultivates a relationship between hand and eye that I believe is vital to unlocking creativity.

A notebook is a place to experiment freely. This means no fear and no judgement, just jot the thing down. I keep my rough drafts in ideas books (notepads, sketchbooks and collections of bits of paper), these books are a strictly critique free zone where I am allowed to play with ideas as they come and note them down as quickly and effectively as possible. These initial doodles and lines of text are usually never seen by anyone else, so it doesn’t matter if they’re absolute rubbish or only I can understand them. What matters is that something in there may be worthwhile or spark off something worthwhile for me that I can develop.

Brevity and clarity are what you are looking for at the noting down stage. Stickmen, arrows and doodles of poo may feature, but once you have an idea caught you can build on it however you like and at your leisure.

To express your emotions, you have to be very loose and receptive. The unconscious will come to you… – Louise Bourgeois

I have found that inspiration is a passive rather than active process. By cultivating the habit of jotting down ideas as they come to you, you will develop receptiveness to more ideas. You can then passively examine these ideas as and when you please, to go further with them or generate new ones.

If you find that you have run dry of sparkly inspiration juice you can look through old notes. Sometimes you’ll find those ideas have evolved as your subconscious keeps scratching away at them even as you focus on other things, or that a new idea that just doesn’t really work can be brought to life by combining it with an old idea you’d quite forgotten about. Sometimes you’ll find your skills aren’t up to creating the wonderful thing you’ve just imagined, but when you stumble upon it in a notebook months or even years later your abilities have improved with practice and you can make it as good as you intended, ready to be hung in the Louvre rather than on your mum’s fridge.

In spite of everything I shall rise again: I will take up my pencil, which I have forsaken in my great discouragement, and I will go on with my drawing. – Vincent Van Gogh

The more you make the effort to note down your ideas as you have them, feel comfortable experimenting  in a non-critical way and feel at ease and relaxed in your creative explorations, the more you will find notebooks and sketchpads useful sources of inspiration.

Hopefully you’ve found this helpful and you’re now inspired to run out and buy a notebook or sketchpad of your own. Next week I’ll be talking about the wonderful world of random image and word stimulus. Until then if you’ve found this helpful, enjoy using this technique yourself, or store your ideas in a memory palace to save money on paper, I’m always interested to hear from you – so do let me know what you think in the comment’s box below.

Words and Pictures from the Middle East & Balkans